# How to add multiple subplots to a figure

We've learned that a Figure can contain multiple sets of Axes, each with their own plots.

The documentation often calls a set of Axes a "subplot".

This code looks like it creates two subplots within the Figure object, but actually if we run the code, we see this: 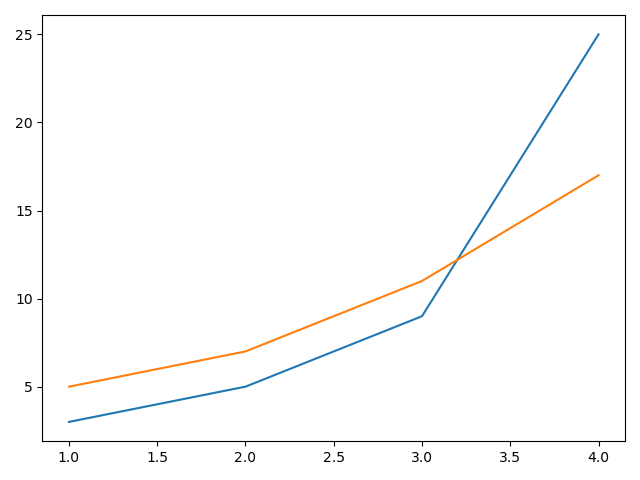 The reason for that is that when we call .add_subplot(), we need to specify the location of the subplot within the figure.

The location of each suplot is specified as three numbers: (nrows, ncols, index).

We can modify the code above to place the two subplots in adjacent cells within one row:

The second subplot is on (1, 2, 2). This keeps the figure unchanged (since the number of rows and columns is the same as before), but places this subplot in cell 2. That's the next cell to the right.

The index value starts at the top left, and moves right row by row as shown by this diagram:

Matplotlib allows us to pass a three-number code instead of separating them with commas. I strongly dislike this, and I would recommend avoiding this. However, it's good to know as a lot of people do it!

Also, this doesn't work when the total number of cells is greater than 9.

# Using plt.subplots() as a shorthand

We're doing this very often when working with multiple subplots:

So matplotlib has a shorthand that we can use:

This creates a figure with 1 row and 2 columns. It returns the figure and a tuple of axes in their usual cell order. Therefore, ax1 is the one at the top left, and ax2 is the next one to its right.

If we did this:

Note that we have a tuple of tuples when using more than one row!